My husband Steve is a sucker for anything chocolate, especially when it’s amped up with cinnamon and a kick of cayenne. So much so, that we venture downtown to our favourite hangout that serves a dark chocolate Chili Pepper Gelato. Yes, you heard me. This is something that I wouldn’t make a beeline in there for but Steve is another story. If we happen to be in the area, he runs in just to have a scoop in a cup with a very small spoon to make it last longer.

Can I tell you what transpires if this gelato place doesn’t have this flavour?

He cries. He actually CRIES. And, the disappointment is so overwhelming, he will actually take a pass on the whole gelato thing. Not joking. Lots of drama here.

Soooooo, when one of my fellow Toronto food bloggers posted these Mexican Hot Chocolate Brownie Bites on her feed the other day, I was stoked to try the recipe. BUT, and there’s a BIG BUT. As of last week, Steve started his 2019 “new year” “new you” diet. OY.

What does that mean?

It means I’m hauling these beauties to the office for my girls to enjoy.

I had another issue here. I needed a “taste tester” to make sure that these were as good as they looked on this post.

I thought that Steve would say NO but he didn’t disappoint. He literally took a lick of the frosting to make sure it was to his liking AND he had a TEENSIE WEENSIE bite of this mini brownie.

Tons of willpower to NOT stick the entire thing in his face but his willpower outlasted the craving for one of his favourite things in the world – SPICAAAY chocolate.

Okay, so there’s nothing wrong with a straight up BROWNIE, but when you make one that’s packing heat, that’s next level.

If you’re wondering what makes this recipe Mexican, it’s simple – the addition of cinnamon and cayenne pepper adds the warmth and a touch of heat. If you’re going to make these, do what I did, cautionary restraint on the first round. I followed the recipe to a T and although they were good, I’m going to kick up the heat a bunch next time. This is one of those recipes that you need to play with until the seasonings are to your liking.

A perfect cozy brownie recipe for this time of year AND to spice things up for Valentine’s Day which is just around the corner.

Oh, and if you’re wondering why my head is cut off in all of these photos? The brownie bites were the star of the show here, my hair (and face) was frightful this morning. 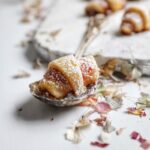